One of the data points that stuck out to me this year in the U.S. Civil Airman Statistics relates to a continued jump in pass rates on initial CFI practical tests. A test for a certificate that has historically been rumored to have exceedingly high initial test failure rates, the numbers over the past few years have been improving. 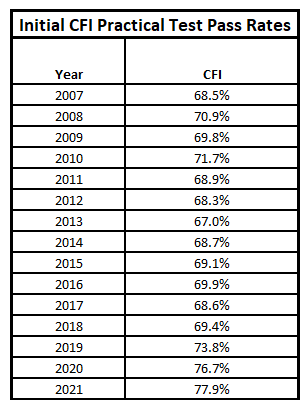 We can see from the data (as I have compiled it from multiple years of FAA reporting) that the pass rate remained very stable over the past couple of decades, hovering near the 68-69% range for most of those years.

Since 2019, that rate has been climbing.

In fact, the pass rate has increased nearly 10% on average over the past three years.

I can’t help but be curious, why?

Jokingly, I was talking about this with a colleague and said, “must be the DPEs are all getting easier.” He responded, “how do we know it isn’t just flight training has improved?”

I guess, it could be either. But it could also be something else all together. IN fact, the timing of the improvement in the pass rates correlates closely with another potential explanation.

In 2018, the training industry began implementing changes the FAA made with regard to the requirement of use of complex aircraft in commercial, and CFI practical tests and training.

One might be hard-pressed to detail a causal relationship between this regulatory change, but it sure is corollary. The timing f the regulations change and the change in pass rate sure seems to coincide nicely.

Thoughts anyone? Could it be this simple? Is it a good or bad thing?