I like looking at pilot certificate data. Those of you that read this blog probably already know this. But what about mechanics?

Airplanes don’t fly, at least for long periods of time without mechanical attention. Our pilot population is aging, declining, and changing; so is our mechanic population.

A starting point might be to look at the total number of “mechanic certificates held” as a measure of how many are out there. 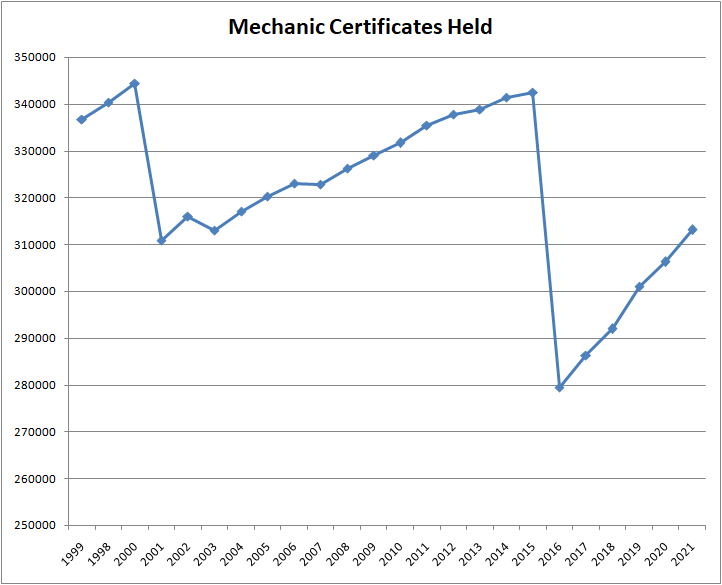 This chart however in some ways drives more questions than it answers. Sure, if we look at 1999 and 2021 comparatively we see that there are less certificates held in 2021. But we also see some big dips and then climb backs of numbers of certificates held. Certification process seems to be the explanation for the big drops (changing in timing and process for maintaining IA certificates – that require renewal). So, the gist is that isn’t as big a worry as the chart might initially indicate, but anytime we see a bunch of people drop out of certificate, even for administrative reasons, it generally results in less of them “becoming recurrent” again.

Age is a factor here. And it is going to catch up with us unless we are backfilling our mechanic population with new entrants to the jobs who are younger.

When we look at the distribution by age of those who hold mechanic certificates as of January 1, 2022, we see that it heavily loads its population base toward older ages. In face, as of this time 23.43% of certified mechanics were over the age of 65, and if we looked at how many are over the age of 50, we see that 63.44% of mechanics fall into this category. The overwhelming majority of our currently certificated mechanics are over or rapidly approaching general retirement age.

With most of our mechanics falling into what one might call an “aging population demographics”, it means we need to fill those numbers back in with younger entrants into the career path.

The short answer is that we probably are not doing enough of that. We can look at the question of how many mechanic certificates are being issued each year.

The next chart shows us that since 1999 we have seen a continued drop in the number of mechanic certificates issued each year. Naturally, in 2020 we had a big drop as certification programs experienced the effects of COVID. Even with that, we are seeing much lower numbers of mechanics certified each year than we did a couple of decades ago. 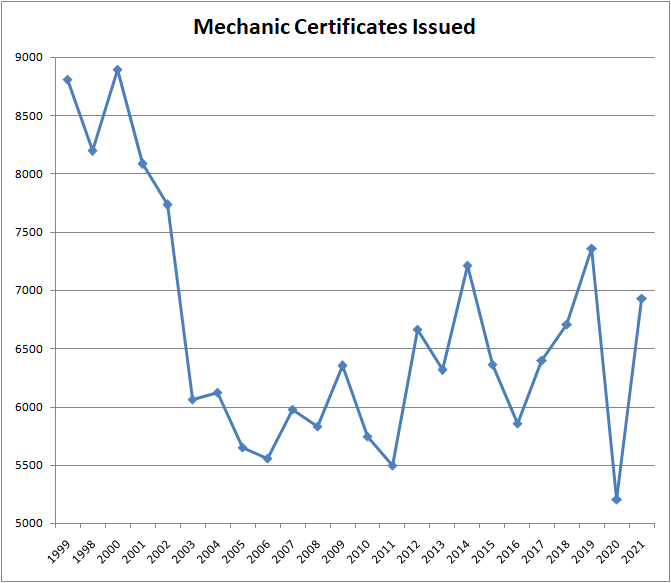 The gist is that our industry is probably not backfilling the loss of mechanics due to age with new career entrants.

Always interesting is also the question of workforce population breaks down when considering demographics of male-to-female. At this time, the holders of FAA mechanic certificates are overwhelmingly male. A mere 2.63% of FAA mechanic certificate holders are female at this writing. While I am not the person to say the solution to any workforce problem is just to get more representation of a particular demographic into it (who knows what those people are doing for jobs in other sectors – if you took 50% more females away from a career path that was heavily represented by female workers, wouldn’t that just make that sector short workers also?), we obviously don’t have a career path here that is attracting many female workforce entrants.

There is much more data than we can parse here if we have it. But in a big picture look, it is obvious to me that mechanics are going to be in continued short supply.

We are already hearing about flight training operations, and commercial operators, that have maintenance delays in returning aircraft to service from even routine maintenance due to lack of workforce to complete the needed work. If we can’t keep planes flying, we can’t train more pilots. We can’t utilize our infrastructure to the maximum capacity for the production of the next generation of pilots, keep as many commercial flight operations moving, or expand these operations.

I am in no way saying with this post that we are flying unsafe or unairworthy aircraft. I don’t know operations or mechanics personally that just fly without doing the required and in many cases, desired maintenance. What I am saying, is that I know of places where aircraft are sitting, waiting for mechanics to have the time to work on them. We are therefore under-utilizing our resources due a lack of human infrastructure. If we continue to see declining certification of mechanics, this will get worse.

The flight training industry is going to be in need of good, general aviation, mechanics to keep fleets of training aircraft operating. It might mean we need more apprenticeship programs to build experience for future mechanics. Developing scholarships and funding for younger students who might be interested in these trades might help. Or establishment of new mechanic schools of large scale might be needed. The reality is we probably need all of these as our older generation of mechanics transitions to retirement.

The aviation industry needs multiple components of infrastructure to keep it, pardon the pun, flying high. If we don’t evaluate these key human infrastructure trends, we are missing some of the pieces that keep the entire system working. To some, it might seem early, but I am raising the red flag on this one now. We are going to need more, experienced, and capable mechanics if we are going to keep our pilot training pipeline robust and capable of meeting the industry needs. Mechanics keep our planes safe to fly. Without that, we park them.

The good news is that others are noticing also.

Check out an article from Aviation Pros, “The Time to Train the Next Generation of Aviation Mechanics is Now”

or the article from Oliver Wynam, “Aviation Growth is Outpacing Labor Capacity”

You can also find a bunch of additional Aviation Maintenance Technician Statistics and Facts in the United States a https://www.zippia.com/aviation-maintenance-technician-jobs/demographics/ as provided by Zippia.

The U.S. Bureau of Labor Statistics also provides the Occupational Outlook Handbook for Aircraft and Avionics Equipment Mechanics and Technicians at https://www.bls.gov/ooh/installation-maintenance-and-repair/aircraft-and-avionics-equipment-mechanics-and-technicians.htm#tab-1

There are also some additional demographics available about aircraft mechanics also provided by Zippia at https://www.zippia.com/aircraft-mechanic-jobs/demographics/.