Tracking FAA testing volume is one way to help determine what our flow of pilots looks like and what it might look like in the upcoming years. Two major pieces of this include the practical and knowledge tests. While the 2019 airman practical testing data hasn’t been made public yet, the knowledge testing data has come out and can be tracked in comparison with previous years. If we look at the volume of tests in relation to some of the previous years I have been tracking, the table looks like this with the 2019 data included. 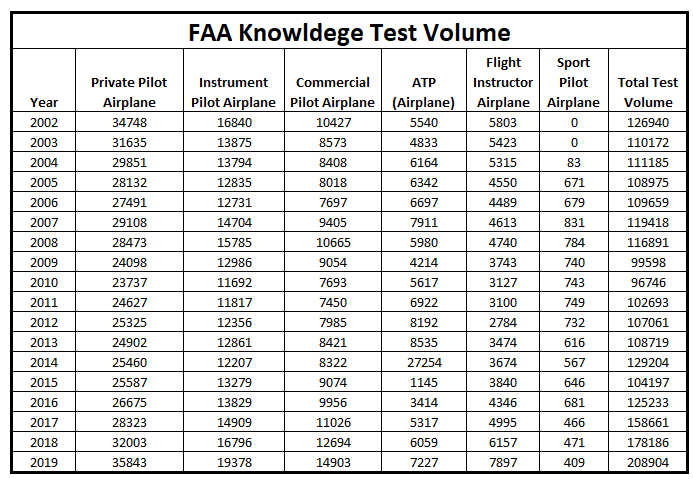 One thing that becomes apparent, is that the overall testing numbers have been increasing and it shows when we graph all of these tests. While we still see the spike in ATP knowledge tests I have discussed in previous posts, we see a general upward testing volume trend in all of the tests given for the majority of the last decade. 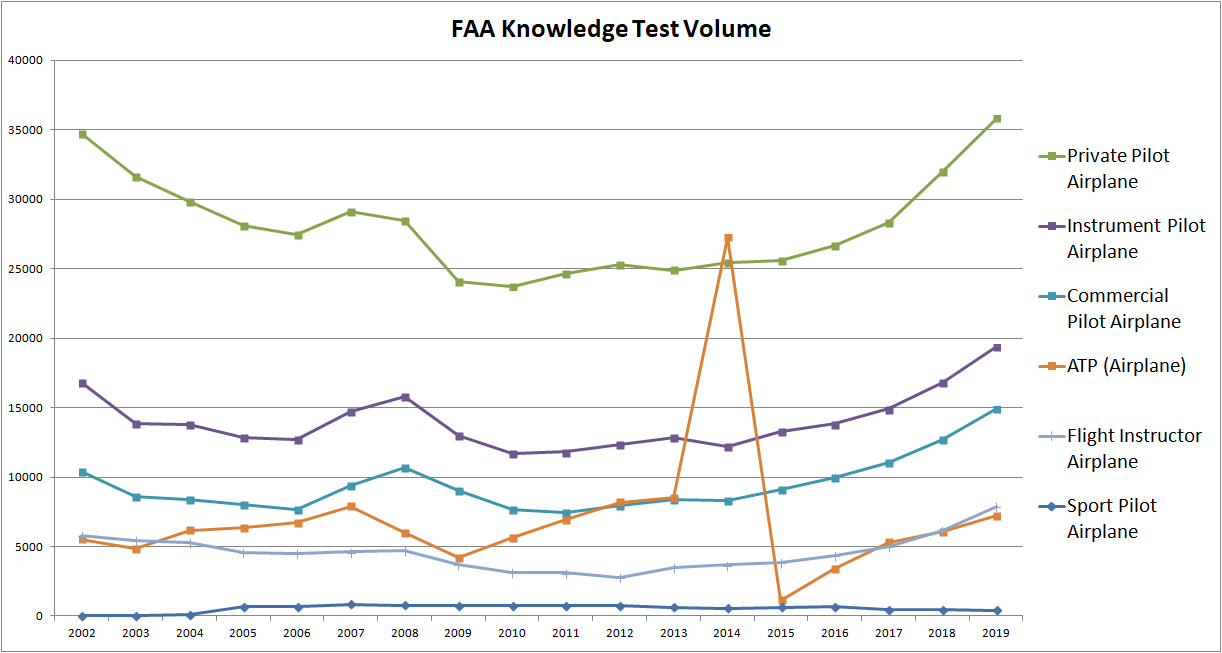 The trend correlates closely with industry trends in pilot shortages, and with those shortages, public awareness and marketing to attract new future pilots to the career path.

An interesting data point that I focused on with this was an increasing trend in the volume of flight instructor knowledge tests. It is somewhat anecdotal, but I am noticing this trend goes up as the active hiring of CFIs has become faster and as other career options for building the requisite flight time experience to be hiring by an airline have become more scarce. Our industry is strongly reliant on future pilots spending some time as flight instructors as the primary method of building enough “time” to meet ATP pilot experience minimums. As our regulations changed and increased hours of service for eligibility, we see a correlative trend upwards in CFI Knowledge test volumes. As the tenure of CFIs at flight training providers has gotten shorter with active hiring by airlines of those qualified CFIs for ATP positions, the turnover of CFIs has become increased at most flight training operations. The speed of this turnover requires more CFIs, and more CFIs take tests to get those jobs that then leed to the next career job, at an airline. The trend in knowledge testing seems to show this in a data form.

The most critical test that may allow us to best ascertain trends toward service in airline careers is that for an ATP (Airline Transport Pilot) knowledge test. Changes in eligibility for this test were implemented between 2013 and 2015 that resulted in a significant drop in the number of people each year who were eligible for taking the ATP knowledge test. Since that crash in testing numbers in 2015, we have seen a trend upward and as of 2019, the testing volume is getting closer again to what it was before those regulations changes. This may be an indicator that the ability to certify ATP pilots may again be reaching a point where it is more likely to keep up with the active hiring needs of airlines, most specifically, regional airlines who hire the greatest number of newly certificated ATP pilots. 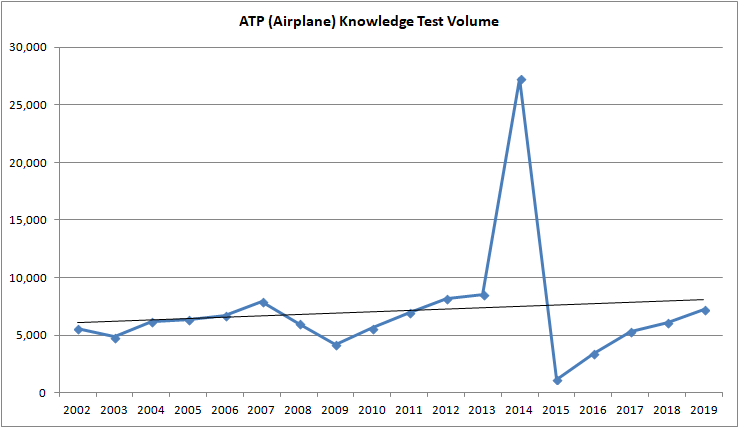 Data doesn’t allow us to gauge all facets of our pilot supply and production pipeline, but it certainly gives us some data points with which we can track trends. The FAA Knowledge test statistics are a part of this. As soon as I get the update 2019 pilot practical testing numbers, I will compile some data and put out a follow up post with what trends we can see since the 2018 data last came out in the spring of 2019.