IFR pilots (or applicants on practical tests with me) will readily tell me the different types of VOR checks available, and many will even be able to find designated points they can use, but fewer apply some of the more practical questions related to VOR tests for IFR navigation.

Let’s assume you remember the types of tests you can do (dual, FAA designated check points of which there are a couple options, and having an avionics shop check the devices being the most common methods) and that you also recall that when you do a check you have to log where it was done, when it was completed, who did the test, and the error that was present (if any) to prove it has been done within the preceding 30-days.

From here, let’s ask a question.

Most pilots do “dual VOR checks” as the most common method of testing. For this test, in the air, an allowable difference of no more than 4-degrees is required to be useable. Ok, most of you are with me so far. But, and here is the question.

What if the error between the two VORs is depicting a 6-degree difference?

Does this mean that both VORs are not working? Or that just one of them is not correctly depicting a radial?

The short answer is that you can’t tell at that point. And this is where the importance of being able to find FAA designated VOR check points becomes a useful skill.

FAA designated check points for VOR testing vary from on the ground, to in the air, to the more rare VOT check point. Each of these has specific radials, potentially distances, and identifiable visual positions that can be used to test a VOR.

Don’t remember where to find these? You probably aren’t alone.

FAA designated VOR test points are found in the “Chart Supplement” and are toward the back of each of these and listed by each state. Below is an example of what you would find for the State of Wisconsin. 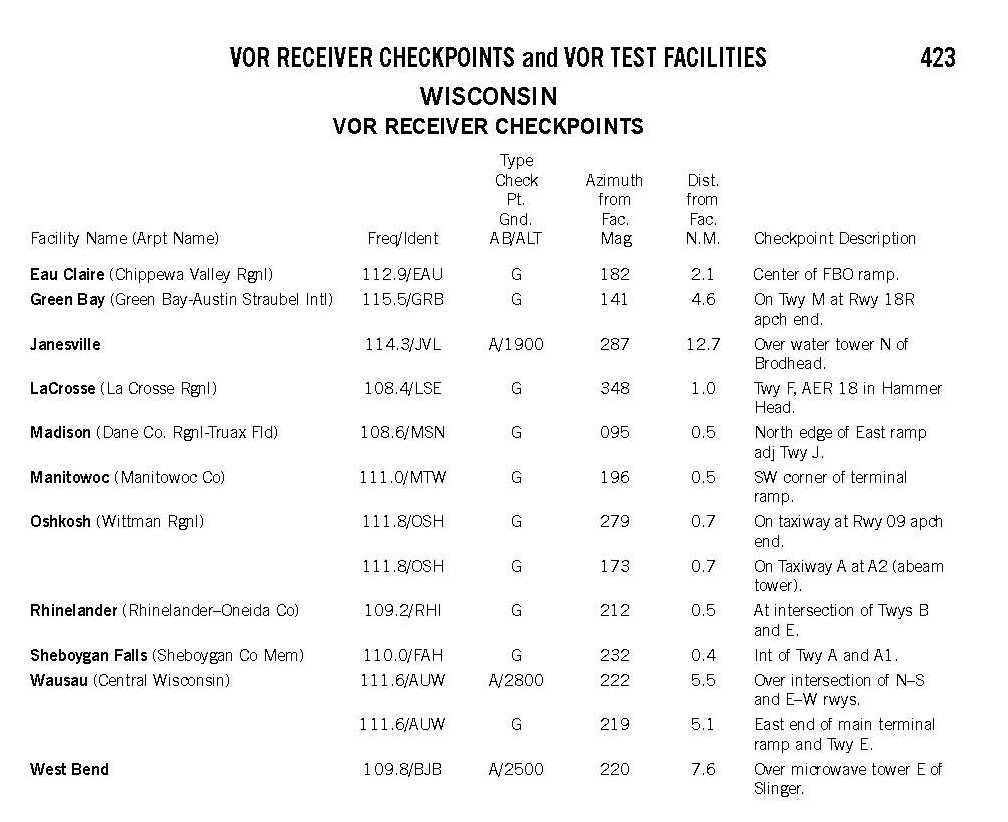 So, now to the practical purpose of this.

Testing a VOR at a specific, designated point allows the pilot to test each individual VOR receiver and indicator in their aircraft on a specific depicted radial separately. If we went out and tried the dual VOR test and found a 7-degree difference between the two radials in the air when we were using the Manitowoc (MTW) VOR, we might choose to select a ground point using the same VOR and land ad KMTW to do a more precise test.

What we can note from this is that the pilot could do the test on the ground, the “G” indicates that as ground, and that the pilot would tune in the MTW VOR on 111.0 and the 196 radial at a point on the SW corner of the terminal ramp at the airport. When there, the pilot could tune in both of their VOR receivers to that specification and then see if either or both VOR depictions in their aircraft are wrong.

In this case, the pilot would be able to at least use NAV 1 for navigation and be able to explain to their avionics shop what might actually need fixing, helping to diagnose the problem for better maintenance service.

Many times, our rote knowledge let’s use memorize a list of things like VOR test options, and our typical practice of doing something such as dual VOR tests will work great when everything is going as planned, but a little deeper understanding and some practical explanation of what to do if the test doesn’t come out as planned can help pilots (and applicants on practical tests) more fully apply that knowledge.