For those of us who have flown IFR actively, we know that sometimes a 500′ overcast ceiling will allow us to easily get down an ILS approach to our destination airport when sometimes the same reported 500′ ceiling on an ATIS will leave us going missed because we didn’t have the visibility to actually find the airport at the bottom of the approach.

In August this year, the FAA released an updated version of the Aviation Weather Advisory Circular AC 00-6B (click here to get a copy ). In taking a little time to review it the other day, I ran across a graphic that highlighted a key point pilots can make note of when listening to weather information before flying an approach. While many of us kind of know the basic considerations of this instinctively, a little review never hurt anyone. 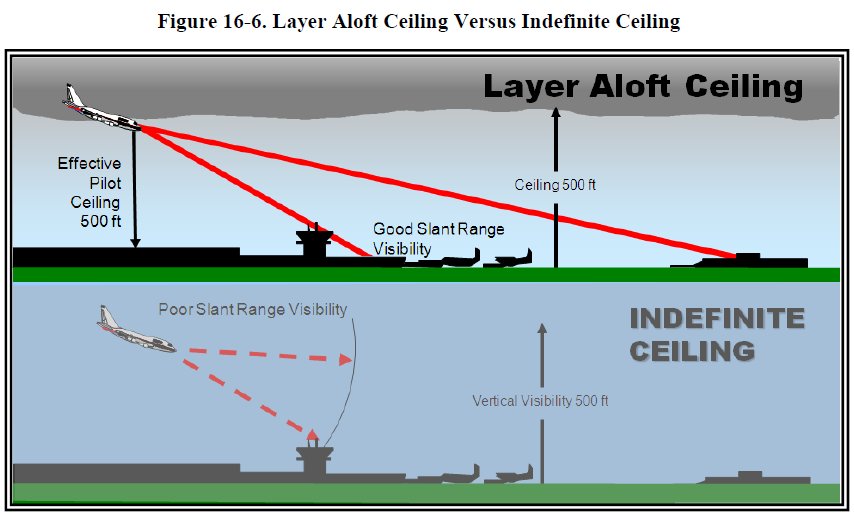 When we are thinking about flying in IFR weather with low ceilings, there is much to consider.

The FAA goes on to talk more about a low ceiling. “Stratus is the most frequent cloud associated with low ceilings. Stratus clouds, like fog, are composed of extremely small water droplets or ice crystals suspended in air. An observer on a mountain in a stratus layer would call it fog. Stratus and fog frequently exist together. In many cases, there is no real line of distinction between the fog and stratus; rather, one gradually merges into the other. Flight visibility may approach zero in stratus clouds. Stratus over land tends to be lowest during night and early morning, lifting or dissipating due to solar heating by late morning or early afternoon. Low stratus clouds often occur when moist air mixes with a colder air mass, or in any situation where temperature-dewpoint spread is small.”

So next time you are considering flying into low ceilings, think a little more deeply about what the METAR is reporting. Is it a solid overcast? Or should you expect that even when you descend below a layer that you will have difficulty with forward or slant range visibility also that could hinder your ability to complete an approach to a desired destination.