The volume of ATP certificates issued in the United States is something that directly relates to our ability to provide pilots for commercial airline operations. As a base certificate requirement, only pilots who meet this certificate level can be employed at airlines, and many cargo carriers, operations. As such, knowing how many of these we issue each year is something that directly helps us as an industry understand our ability to staff these job functions.

This past year, 2022, we generated more ATP certificate issuance in the United States than any recent year; doubling what we have done in either of the past two years and significantly more than what we have issued in any one year in well over a decade.

But is this enough? Well, that’s a different question and one we can also contextualize.

First, let’s look at the numbers.

This past year we saw what appears to be a total of 9387 ATP certificates issued. This outpaces what we have done in recent years, and, in fact, I have been tracking these numbers since 1990 and at no point in that time have we issued more than 9000 ATP certificates in any year. This is kind of a record year.

It is worth noting that in the past couple of years, the lower numbers of issuances were surely affected by the effects of COVID. We see a similar drop in issuance numbers per year in 2009 and 2010 as regulatory changes took effect regarding what requirements needed to be met to qualify for an ATP certificate. Taking these two anomalies out of the averages, we typically issue an average of around 6000 ATP certificates per year, so 2022 is a high point and shows a significant increase in our issuance trend.

Highly active hiring and demand for ATP-qualified pilots is a major factor that has driven the training for and certification of pilots in the past year. Since a large portion of the ATP certificate training and certification is now done at airlines in their initial training processes, the entities needing these pilots are directly affecting the training volume to meet their own employee needs.

What Percent of ATPs are R-ATP?

The R-ATP certificate, since its introduction, has increased in percentage of the overall portion of ATP certificate issued. it does seem to have stabilized at being a little less than a third of the ATP certificates issued each year. Requiring that a recipient of this certificate has completed some level of collegiate aviation-related degree to be eligible for this certificate limits the number of these certificates each year to those that have done this while also completing flight training. In a way, this data point gives us some insight into the percentage of pilots entering commercial service operations who were trained in collegiate aviation programs. 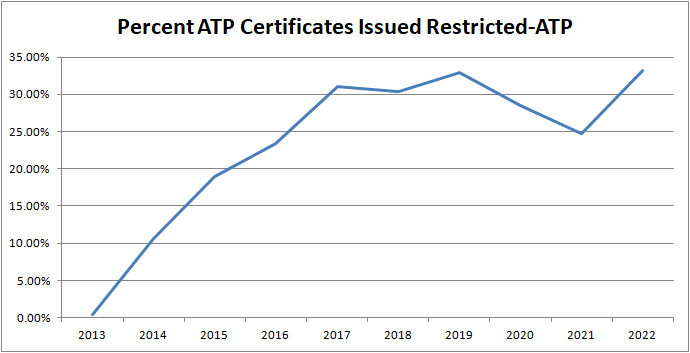 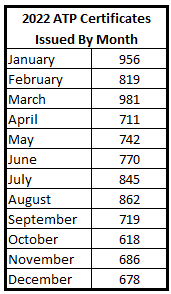 I find a little bit of interest in looking at a more granular data point, how many ATP certificates were issued on a month-by-month basis in 2022.

The first few months of 2022 saw higher numbers of ATP certificates issued per month than at the end of the year. This appears to be a little bit of “backlog clearing” from the lower numbers of issuances that took place in 2020 and 2021 as the world was affected by Covid shut- and slow-downs. As we came out of this period, as airline activity increased again, and as airlines ramped up hiring, they also ramped up training. This training included the initial certification of pilots for their ATP certificates.

We see toward the end of the year that our numbers of issuances stabilized at a point more like 6-700 certificates per month instead of the higher numbers at the beginning of the year. There is some perception that this may be more likely an expected normalized number that we will see on average going forward that is sustainable. This would indicate that our expected production per year might be expected to max out in the upcoming years at a point a little over 8000 certificates per year instead of the high point we saw in 2022 that approached the 10,000 certificates issued point. 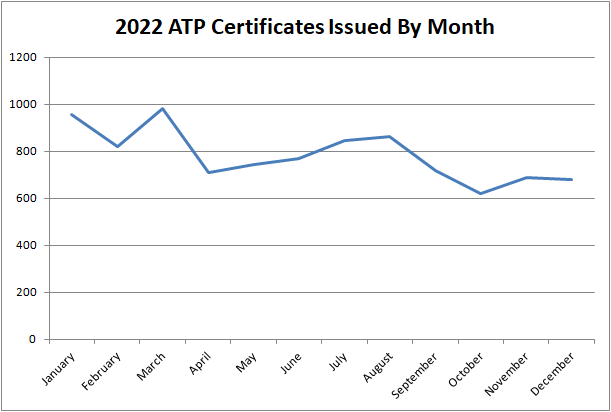 The ATP certificate continues to be the final certification hurdle in a pilot’s training path before they can enter service as a pilot at an airline. The completion of this training is demanding on both equipment and human resources and as such as a limit regarding the quantity of these certificates we can produce over time. Unless the resources to train these pilots are expanded or the training requirements are changed (an unlikely probability), at some point our industry’s ability to train more experiences a cap. The data we have been seeing seems to indicate that we may have hit the plateau point of what we should be able to expect to produce yearly.

That means that as active hiring continues, and as we see continued estimates of active retirement of aging pilots, we are likely to continue to see heavy demand for these pilots in absence of a significant reduction in demand for flight operations.

To put an example to this point, I recently looked at seniority lists for two major airlines and what their expected retirements will be over the upcoming years. What it indicated was that in each of these major airline operations, it was expected that they would experience over 600-700 retirements from their pilot pool due to aging out (the pilots reaching the mandatory retirement age of 65) each year. If we consider that in relation to our ability to produce ATP certificates, each of these airlines alone would need to hire about a month of our ATP production each year. There are certainly more than 12 operators in the United States that require ATP certificate holders to keep their aircraft flying, so unless something drastically changes, even just the demand from a few major airlines will likely suck up our ability to produce ATP pilots each year. The career outlook looks good and our demand for pilots seems likely to continue to be strong for many years to come.