We all know that airline passenger travel and overall airline flight operations have declined significantly during the effects of COVID-19. What we don’t know is the overall long term effects on the aviation industry that will be lasting, and potentially, problematic.

I can’t postulate all of the effects, but I do want to tie together a few data points and bring awareness to one potential challenge we are going to need to address if (when) traffic volumes again increase. This is the concerning decrease in the production of ATP certificates that is beginning to show itself.

When the changes to pilot qualifications were made (resultant from the Colgan crash) that required a pilot to have an ATP certificate for any FAR 121 carriage flight operations, and the requirement of the ATP CTP course was implemented to be eligible for an ATP certificate, the game changed. As a result of these changes, the vast majority of ATP certificates in the United States began to be issued at regional airlines due to the costs and complexity of providing this ATP CTP course. In effect, we made our ATP certificate production dependant on airlines needing more ATPs.

That isn’t the case currently. So they aren’t producing them in any quantity at this time.

In the first, we see that overall worldwide (and domestic) departures of airline flights has dropped significantly. With this decrease in demand, the need for pilots has similarly decreased. Airlines are adjusting their operations accordingly, and simply, we don’t currently need as many pilots. 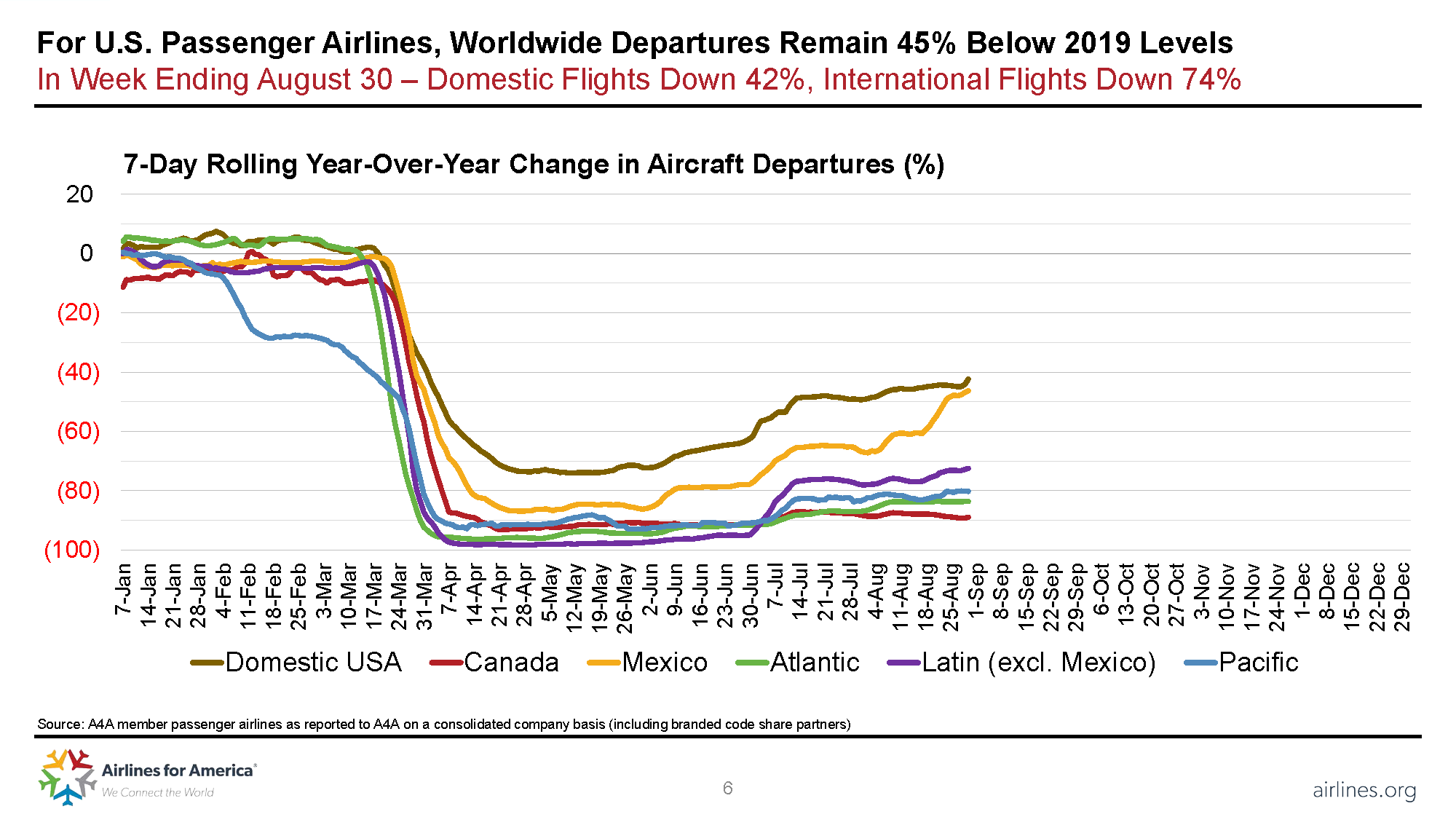 Continuing on, we see in a second slide that the need for flights is directly related to TSA traveller throughput data. This data shows a second measure of significant decrease in passenger need for air travel during the recent months. 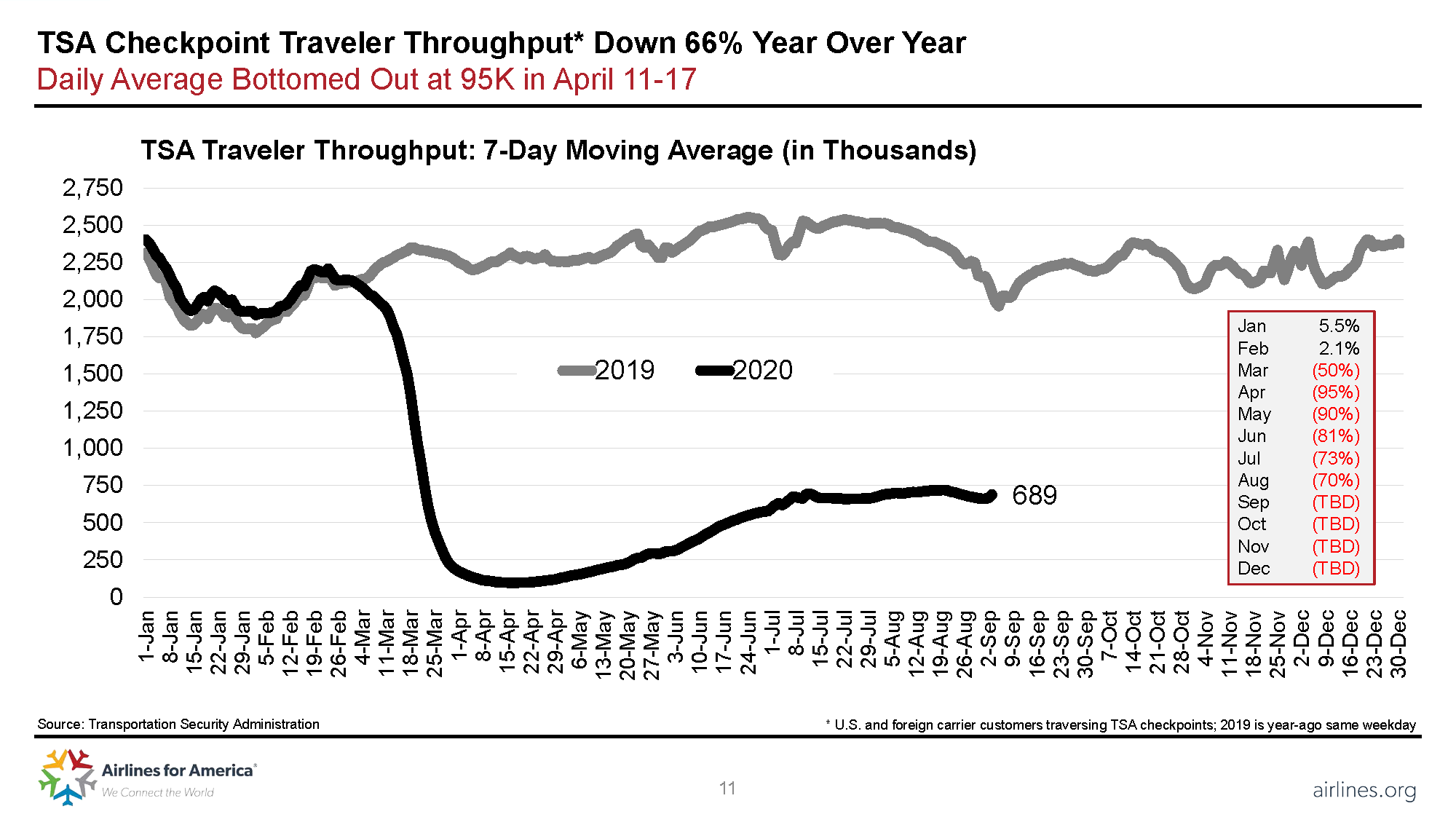 When I pulled this data myself from the TSA, we can see there is a gradual increase in numbers, with some spikes during traditionally high travel periods (such as the one in the last few days at the start of the Labor Day holiday), but nothing that even closely resembles the passenger throughput we had compared to a year ago.

There isn’t a need for as many flights, and, as a result, as many pilots to fly them as we had historically.

The lack of need has made airlines make very hard but realistic choices. Some have given early retirements to senior pilots to cut costs. Many have reduced schedules and spread pilots to minimum flight times to keep them employed at least a minimum level. Others have cut pilots (furloughed), some have terminated pilots, some airlines have ceased business all together. More are feared to do the same in upcoming months.

We all hope these effects will not be permanent, and that flight volumes will continue to grow as our country (and the world) deal with the effects of COVID-19 fallout.

This is where we may have a problem.

Remember where I said we began relying on our airlines to be the producers of our ATP certificated pilots?

Well, since they are making all these cutbacks, nearly all have stopped intaking new pilots for training classes. These training classes are the very places that the ATP CTP courses are completed, and thus, we have largely shut off the production of ATP certificates in the last three months in the United States.

While our trends of ATP certification vary month to month generally, they generally hovered around an average (over the past 2 years) of 520 ATP certificates issued per month in the United States. This production level is based on throughput capacity that airlines have for training classes, and in a large part, to simulator availability (a requirement of the ATP CTP course) that is many times maxed out in our training system.

To the right, you can see the actual numbers of ATP certificates issued on a month-by-month basis since January 2018.

In the past 3 months, since airlines have shuddered training programs for new pilot intake for the most part, we have seen a large drop in the number of ATP certificates being issued in the United States each month.

It is simple. They don’t currently need more ATPs, new hire pilots, so they aren’t making any more. And that means we aren’t making them anywhere else in the United States either.

it is starting to look like this reduction in numbers isn’t just a one month hiccup, and it is likely one that will continue for some time to com. In fact, I suspect it will continue until airlines have called back any furloughed pilots when demand has returned and they then, and only then, will need to train new pilots again.

You can also see the effects of this graphed below (note that there is one other major drop off of ATP pilot production that took place during a government shutdown in 2019 and is an anomaly in the data). We had a pretty general trend going, and in the last three months we have fallen off the cliff when it comes to production of ATP certificates. 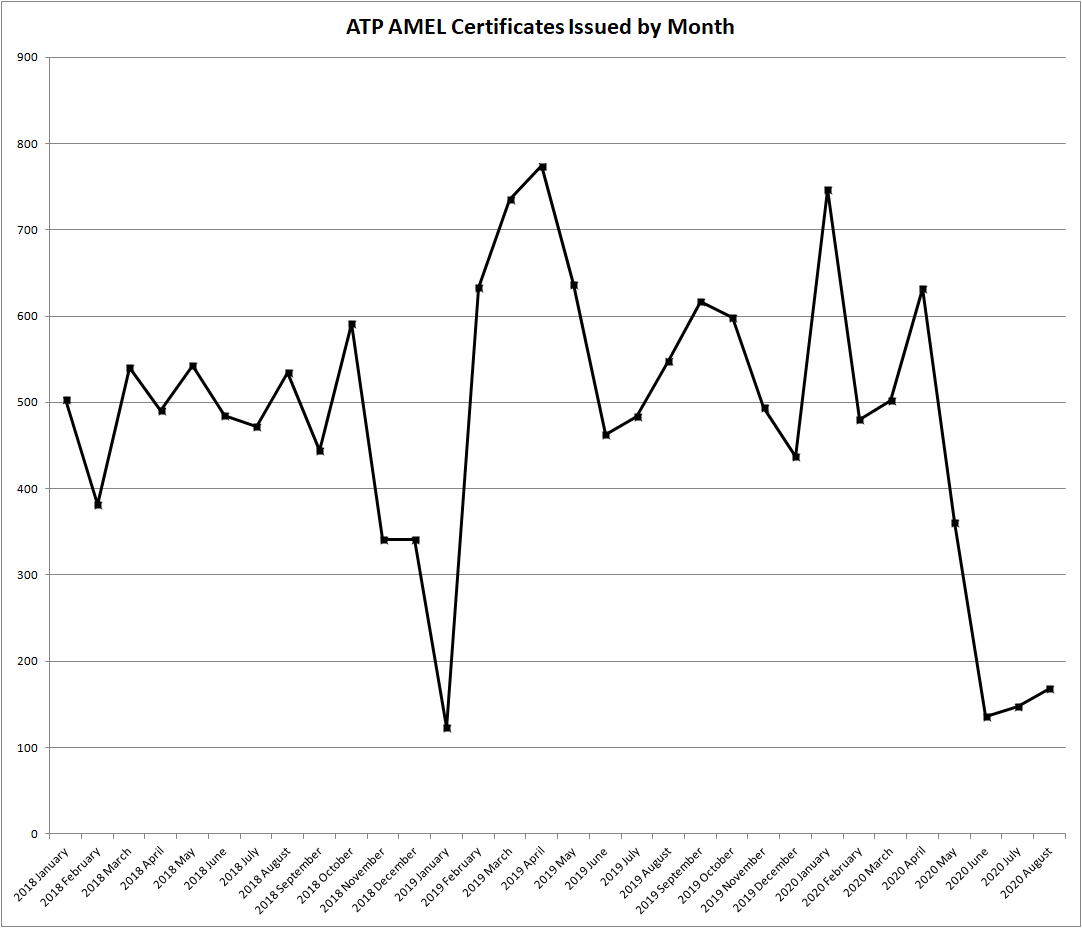 You might be asking, “is this really a problem if we don’t need them anyway right now?”

The very short answer, is no. But the longer term answer, is I really think we have a problem brewing here.

Training programs can’t just spool up and make new ATPs overnight if we find we need them in 6 months, 18 months, or 3 years from now. Adding to that, ATP CTP programs that currently produce pilots can’t keep employing the staff that does this training with no students either. As this trend continues, one has to think that some of these training programs will be shuddered. If closed, that capacity may not return or may take time to re-establish when the need again arises. 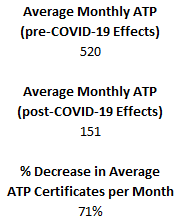 We are systematically reducing our throughput of future pilots who are able to serve in airline pilot service positions. Where we previously were producing over 500 ATP certificated pilots per month, our new average is more like 150 (specifically June, July, and August 2020), an approximately averaged of 71% reduction.

If our pilot training system continues to produce what amounts to an average of 3 ATP pilots per state per month in the United States going forward until we again find demand at a point where new pilots will be in need, we run the risk of having lost period of time where this in infrastructure (qualified pilots) could have been produced.

In effect, we are setting ourselves up for a lost generation of airline qualified pilots.

Spooling up to replace this loss is costly, time-consuming, and potentially unable to meet the need demands if our airline and cargo carriage flight operations crew requirements.

“Won’t the return of those pilots fired or furloughed be enough?” Many will ask this, but the reality is the answer is no. We didn’t have enough pilots going into COVID-19, and in response measures, many early retirements are being offered to senior pilots. If the demand goes up, these are individuals who are unlikely to return to service. This reduces the return capacity of pilots. Add to that the general consideration that during any furlough period, when called back, some pilots have transitioned to other work options and decline return to service even when a position is offered. Historically, certification was less of a barrier, but now refilling those positions comes with extra hurdles and those hurdles require airline training systems (or externally developed training options capacity – that currently don’t exist) to meet the training requirements that have been put in placde in the last decade. These training systems have limited throughput, so if a flood of new pilots is needed, that flood may be backed up in a funnel that only has limited capacity to generate qualified pilot output.

We went into COVID-19 with a pilot shortage. We may come back out of COVID-19 with a worse one if we are not forward-looking in our human resource considerations for the pilotage of commercial carriage aircraft needs for the future.