Every year when the FAA issues the previous year’s Airman Certification Statistics, I get a little giddy. I know. I’m a dork. But someone has to be, so it’s me. Well, and there are a few others in our industry who do the same. You know who you are. 🙂

This data helps me get a feeling for what our airman certification process, and as a result, our pilot supply pipeline is doing.

With that, I try to pick out some of the highlights and draw attention to them as I see them and ask for input from others.

So, last week, the FAA issued the numbers, and since them, I have been playing with my spreadsheets and seeing how the new data compares with previous years and what it might mean for our aviation system.

So, on to the numbers and some of the things that I have noticed that might be of interest or telling about the state of our pilot training and certification process.

Overall, Pilot Certification Numbers Across all Certificates are Rebounding

Looking back over the past two decades, we generally were seeing a decreasing number of total pilot certification numbers. In the last two years, these have increased again and are trending toward more moderated 20 year trends. 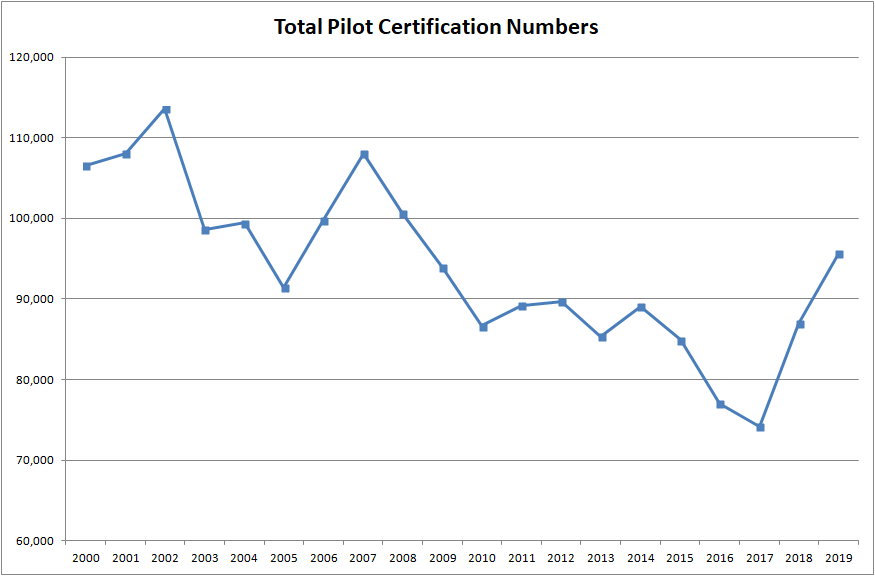 Digging deeper into this data, we can see in a couple key certificates, the Private Pilot and the Commercial Pilot certificates the trends are positive in these specific certificates also. 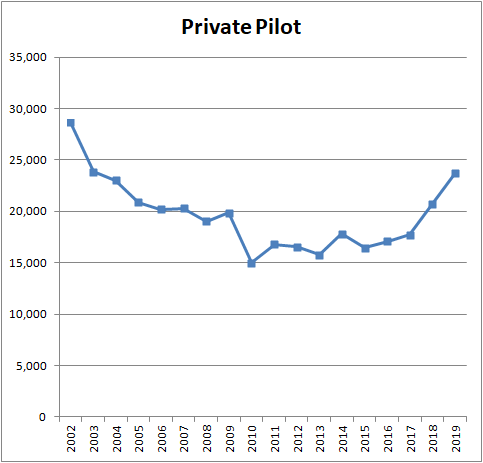 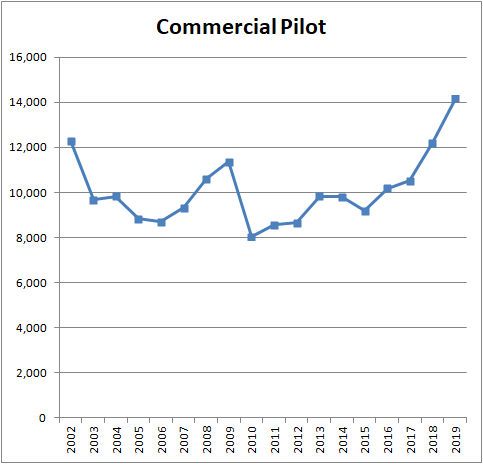 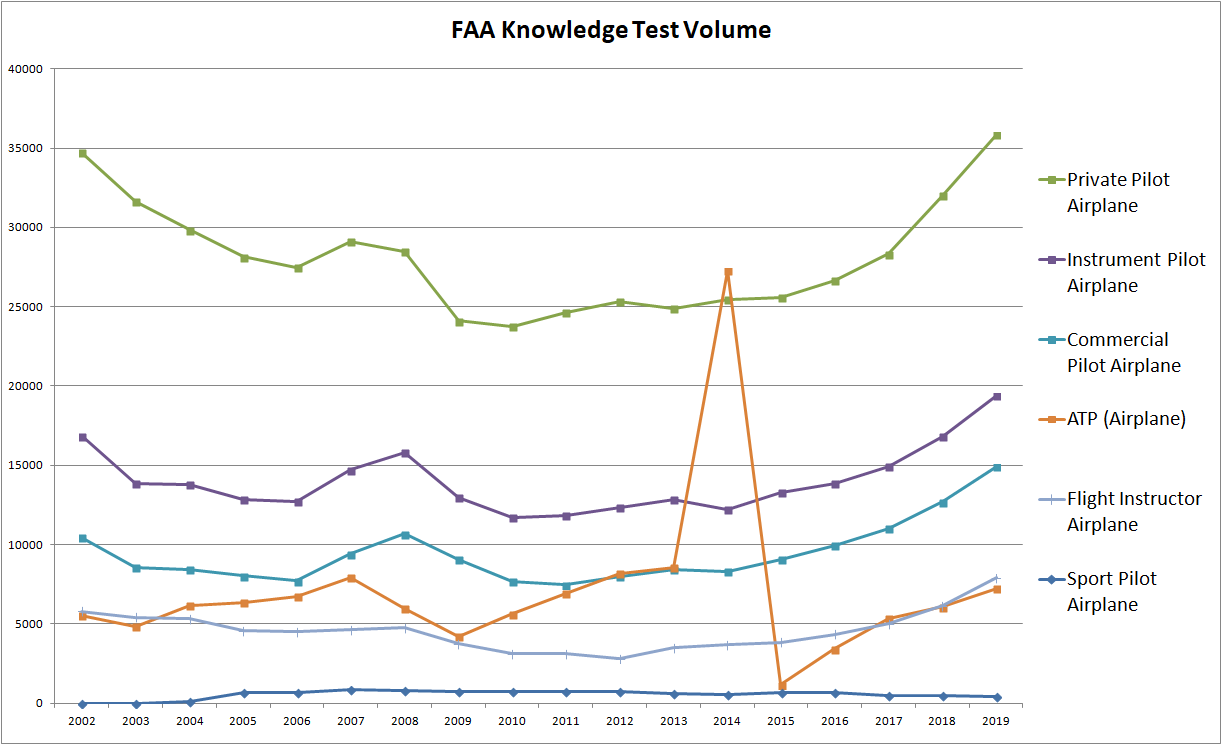 A key piece of the pilot pipeline is the ability to certify ATP pilots so they can be employed by airlines. This is a critical number as we determine if we will be able to and have certified enough pilots to meet airline service needs. This number decreased significantly a few years ago with some regulatory changes, but as training systems have been modified and the industry has responded, the training capacity has been increasing. We see in the following graphics that the certification capacity is returning to more historically comparable levels. 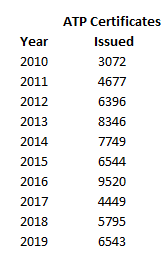 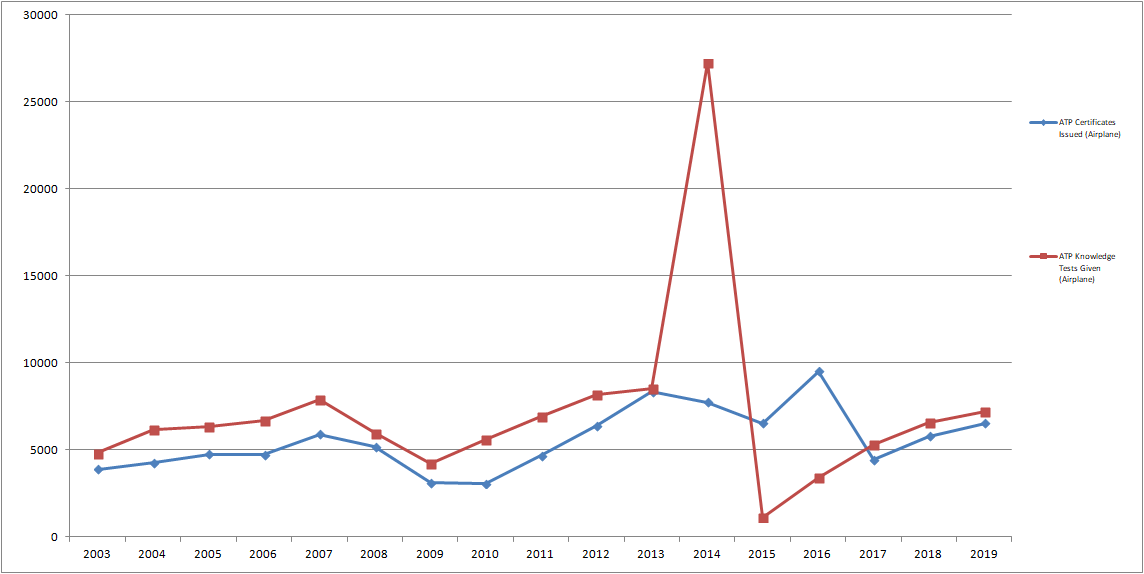 An interesting point about ATP and CFI certification data is that the average age of holders of these certificates has decreased for the first time in a long period of time.

For the first time in over two decades that CFI and ATP average ages have declined. This is an indicator that a large number of younger pilots went through the system this past year for certifications for ATP and CFI certificates. I suspect this has a great deal to do with active hiring and the perception of a strong career opportunity for professional pilots.

You can see the data trends in the following graphs. 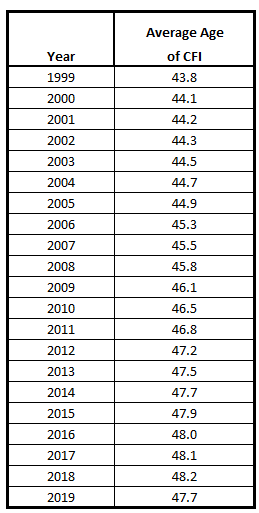 A major factor in gaining experience to qualify for pilot employment at airlines has continued to be working as a flight instructor. As the career path saw active hiring and attractive career potential, we have seen increasing numbers of CFI certificates issued in recent years. 2019 saw a big increase in this again as can be seen in the following graphics. 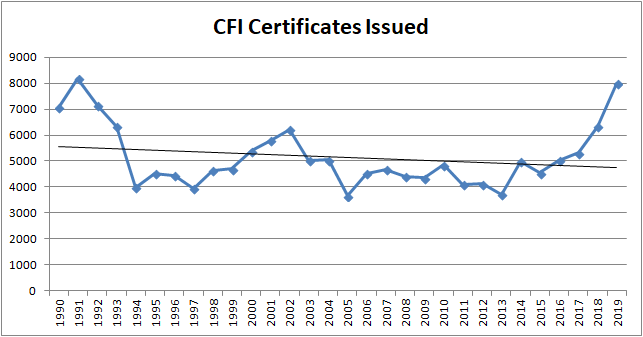 Perhaps of note, is that many flight training providers have also seen faster turnover of employees in CFI positions in recent years. Instead of staying jobs for 2-3 years, many CFIs work in those positions for less than 18 months. The effect of this is a faster “churn” of employees and a greater need for “new” CFIs to fill in for the ones that move on to other jobs. This is likely a factor also in the need to certify increasing numbers of CFIs to replace those moving on. This doesn’t mean that the CFIs who were previously doing the work of a CFI would fall out of the total number of CFIs in the system, but it is unlikely that the vast majority of CFI certificate holders are actively engaged in providing day-to-day training at most flight training providers.

A specific data point that many of us track, as we certainly would love to see female representation increase as a percentage of our pilot community, is the certification data related to female pilot certificates.

The trend here is at least positive over the past years, and I track it, so I thought I would share that with you also. 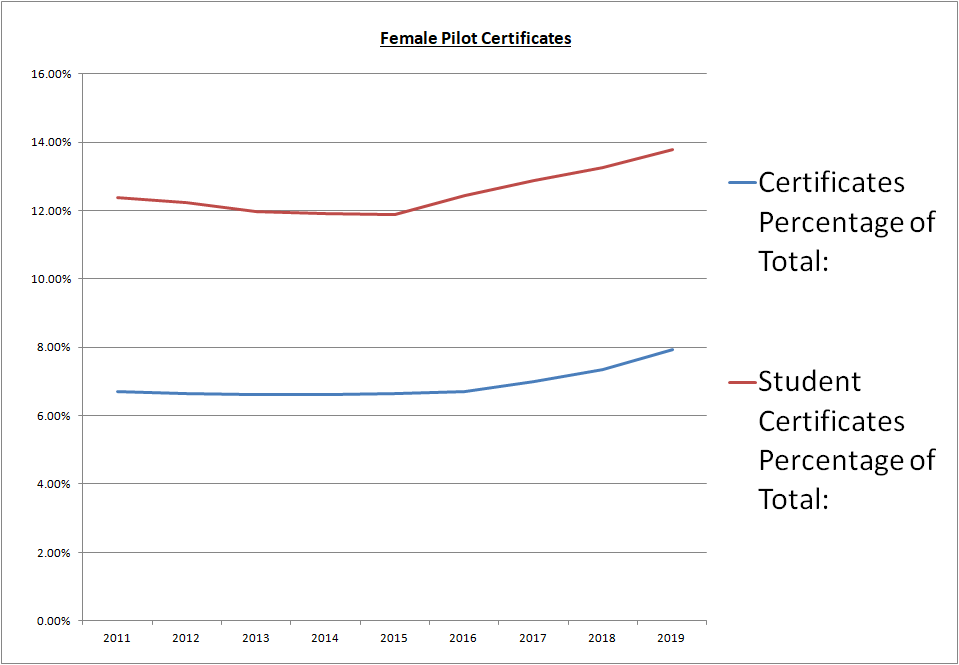 Next Year May Be VERY Different

Now, this may change in the next year with the effects of training and certification slowing or stopping, but we will have to evaluate that data as it comes in. Initial indicates are however that certification events are significantly down in April sine previous months, down nearly 55% in the month of April from what was being experienced in January, February, and March of 2020. This has happened as states have done stay-at-home orders and many training providers have completely stopped training and even more have reduced their training flow. This will take time to come back up to full capacity, so as we consider 2020 numbers, it seems logical to think that at least for the second and third quarters there may be significantly lower training and certification volume taking place than in 2019 and previous years.

Ok. Enough dorking out on numbers for now. But I hope that what I have shared here helps anyone reading it better understand some of the data points of our industry.