Well, the FAA does gather this data on the application forms that it collects when a practical test is conducted for a certificate or rating, but, to the best of my knowledge, it is not collected, collated, and reported in any way to the public as an aggregate.

But that doesn’t stop us from being curious, so I took the data from the FAA 8710-1 forms from the over 1000 practical tests I have given and collated it into a couple of data points that are now presented in this small, but highly intriguing chart.

The below chart collects data from practical tests I have given (primarily in Michigan) and helps create a general understanding of how many hours of flight and simulator time that applicants had accumulated at the time of granting of various pilot certificates and ratings. Specifically, we compiled the data for the initial private pilot certificate, instrument rating, and initial commercial multi-engine certificate events

With that said, here is what we found. 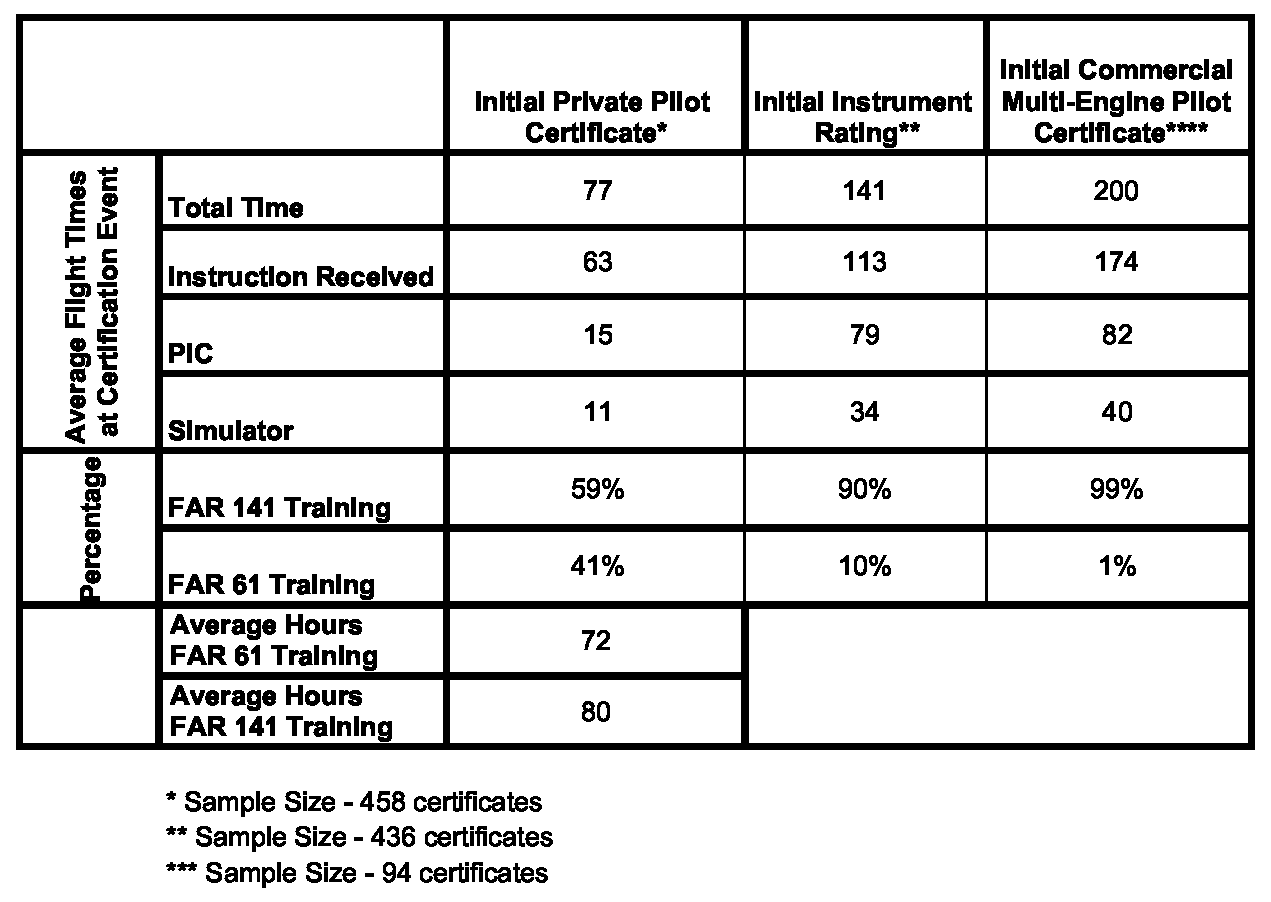 This chart highlights some interesting points and at a first glance may lead the reader astray. Let’s start with the first thing a couple of friends noticed when I shared the results with them.

Is it faster to get a private pilot certificate in FAR 61 training than FAR 141 training?

Maybe. In this particular data set, the answer is yes, which is interesting and not actually what I expected we would have found when we set out to compile this data.

A guess ahead of time might have lead someone to think that the structured program of a FAR 141 program would result in students getting their private pilot certificate at lesser hours than a less structured program. The reason for this cannot be determined from the data, but it does point out that our initial impressions may not always be correct when we look at actual data.

When we looked at just the private pilot certificate, the difference between FAR 141 and FAR 61 training was less noticeable. But when we look at the full path of training where an applicant has transitioned through FAR 141 training typically through their private pilot certificate, to an instrument rating, and to an initial commercial multi-engine certificate, we find their average total flight time is a very round number of 200 hours. This is not possible to do when training is conducted in FAR 61 operations due to the fact that a regulatory minimum of 250 hours is required to be met. This leaves a student in the position to be a “paid pilot” a full 50 hours earlier than if they did their training under FAR 61 operations. This demonstrates the benefit of a full FAR 141 curriculum approach to reducing hours of training.

Considering a very large number of the practical tests I conducted that are included in this data set are at a FAR 141 collegiate program and even some of the non-FAR 141 events were at training operations that have simulators, I kind of expected there to be more hours in simulators represented. Does this hint that we may be underutilizing simulators? I know this debate has been going on in this industry, but perhaps this data helps support that argument.

While I didn’t include it in the table, a friend asked me if “15 hours really seemed like it was accurate or was a little low for the solo (PIC) time a private pilot does…” So, I dug into the number some more.

A private pilot really isn’t getting their certificate in 40 hours.

Most of us in the industry kind of knew this already, but I don’t think most of us thought the average time was 77 hours. This means that the average private pilot is taking 185% of the minimum time the FAA requires to meet the requirements and pass a private pilot practical test.

For years we have been quoting numbers to customers that indicate averages like 55-60 hours of realistic flight time experience before someone takes their private pilot practical test and gets their certificate. This data really showed that that is rarer than we might have thought.

Why? That is probably the next question we should ask.

Are we doing training wrong? Is there more to train that there was historically? Or are we just bad at it? I’m not sure, but this data definitely gives us some food for thought about which we might want to have some more discussion.

Some notes on the data sets.

The overwhelming majority of the tests in this data set have been in Michigan, with a large percentage of them in a collegiate aviation program. There were a little under 500 for each private and instrument pilot certificates issued, and just under 100 for the initial commercial multi-engine certification events. The hours tracked in this were taken directly from what applicants reported to the FAA as proof of required hours of flight training to be eligible for the certificates and ratings for which I provided practical tests. Only successful, certificate/rating resulting passing events were used in this data.

This is the data to which I had access. If any other examiners reading this post have copies of the 8710-1’s for their applicants and want to share their results with me, I would be happy to provide a copy of a spreadsheet template that you could use to compile your own data to submit to expand the data pool and include them in an updated future data set for more robust reporting. I fully expect some potential variation might be possible for regionality and training environment.