The CFI practical test is definitely known as one of the hardest, longest, most grueling practical tests pilots take. As I have been giving them over the last couple of years, there are a few things that are standing out in the area of CFI knowledge relating to what I generally call “administrata” related to the CFI’s ability to properly train and qualify their students.

These are critical knowledge areas that directly relate to the practical ability of the CFI to demonstrate their knowledge level of how they will actually do their jobs when they are certificated. In some cases, it may seem like these knowledge points are “way down in the weeds” or just part of the “nitty gritty minutiae” that seems trivial, but these items directly relate to whether the CFI will properly train and qualify their future customers (students) for certificates and ratings.

As a DPE, I find the ability of a CFI to answer these questions correctly directly relates to whether or not the students that the CFI will eventually train for things like their Private or Commercial certificates are actually qualified and have received training that is compliant. On more than one occasion, CFIs not knowing some of these administrative intricacies has resulted in their students being provided training that is ineligible for use toward a rating or certificate, representing significant wasted training time and cost, and in some cases, these oversights have resulted in the termination of the CFIs certificate privileges. There really is a reason we ask these questions.

With that said, here are a few common knowledge area deficiencies that might help a future CFI candidate have a better chance at passing that initial CFI practical test. If you are reading this and are already certificated, this might serve as a good refresher to remind you of a few quirks that can ensure you are providing proper training.

Cross-country experience toward a rating or certificate must include a landing greater than 50 nautical miles from the point of departure, not just a leg over 50 miles in length.

Under § 61.1 [https://www.law.cornell.edu/cfr/text/14/61.1] there is a definitional point that indicates that “for the purpose of meeting the aeronautical experience requirements (except for a rotorcraft category rating), for a private pilot certificate (except for a powered parachute category rating), a commercial pilot certificate, or an instrument rating, or for the purpose of exercising recreational pilot privileges (except in a rotorcraft) under § 61.101 [https://www.law.cornell.edu/cfr/text/14/61.101]), time acquired during a flight…” must “…includes a point of landing that was at least a straight-line distance of more than 50 nautical miles from the original point of departure.”

In this case, if the pilot departed from Traverse City (KTVC), then flew to KGLR, KMBL, and back to their starting point of KTVC they would not have gone to a landing that was farther than 50 nautical miles from where they started, so it wouldn’t meet the definition of what counts toward a rating or certificate even though it met all the other requirements. Take a look at the graphic below and see how that happens. 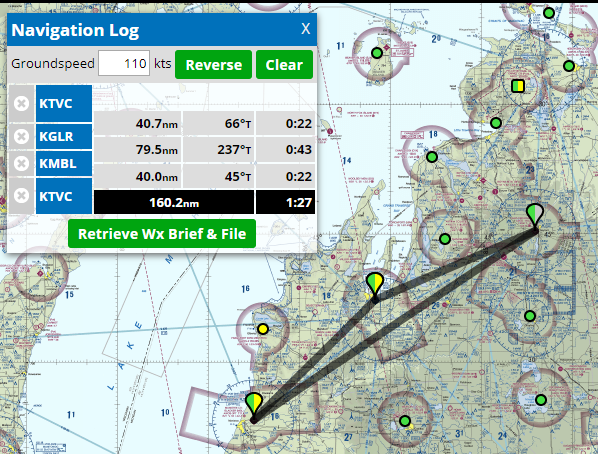 You COULD make this count if instead you started at KGLR or KMLB and flew the exact same route since those points are at the far point of the triangle and would then include a point that was greater than 50 miles from the point of origin. It may seem like splitting hairs, but it can be the difference between a flight counting and one not counting. The same rule holds true in the instrument and commercial pilot training requirements. Do your due diligence as an instructor to make sure you students cross-country flying really will count and makes them eligible for the rating or certificate for which they are going to be testing

FAR 61.129 sets forth the requirements for a commercial pilot certificate [https://www.law.cornell.edu/cfr/text/14/61.129] and there are a couple of things in it that commonly raise confusion with CFIs. As a DPE, those confusion points have regularly resulted in me sending an applicant for a commercial pilot practical test home because they aren’t properly qualified. For that reason, this understanding is critical to me when I test potential CFIs.

One of the biggest areas of confusion on this section relates to two areas, whether a pilot who has an instrument rating must receive 10 more hours of instrument training toward their commercial certificate, and if they can combine dual and solo flying to meet the 10 hours of experience that requires a long cross-country flight (of over 300 miles with a point of landing at least 250 miles from the point of origin and a total of at least three landing points) and also requires 5 hours of night experience with at least 10 landings at an airport with an operating control tower.

The FAA has been very clear that “dual” and “solo” cannot be combined in this area. In a 2016 FAA Legal Interpretation to William Grannis [https://jasonblair.net/wp-content/uploads/2019/02/grannis-2016-legal-interpretation.pdf], they noted that, “The language of the requirement in §61.129(a)(4) is clear that a pilot must choose either to log the 10 hours as solo flight time or log the 10 hours as flight time performing the duties of pilot in command with an authorized instructor on board. In the case of §61.129(a)(4) neither the preamble nor the rule introduced language indicating that logging a combination of hours is acceptable to satisfy this requirement.”

To the question of previously qualifying instrument-rated pilots as applicable for the 10 hours of required instrument training, a 2010 FAA Legal Interpretation to Kristine Hartzell is illustrative and directive. [https://jasonblair.net/wp-content/uploads/2019/02/hartzell-2010-legal-interpretation.pdf ].

Imagine a moment where an instructor sends their student off for the night experience, but thinks they would like to ride along for that long cross-country? A student might end up with 5.2 hours of night time that is PIC and not DUAL received, and maybe a long XC qualifying flight that was PIC AND DUAL received, since they can be both, off 5.5 hours. In this case, they could total 10.7 total hours, but not all of it was SOLO PIC “OR” DPIC. Splitting this would leave the applicant ineligible when it comes to these requirements for a commercial pilot certificate under FAR 61.129’s basic aeronautical experience requirements.

Mis-application of these requirements has caused me to send multiple candidates home as non-qualified for the certificate at the time of their scheduled practical test. In many of these cases, it has required pilots to incur the cost and time of re-flying experience that they thought they had already done, but either doing so with, or without an instructor to properly meet requirements, whichever method most quickly allowed them to become qualifiable.

Adding a Category or Class Qualification

Flight instructors don’t always provide training that is just for basic qualifications. Many times they train people who are adding privileges to already held certificates.

In CFI testing, it is common for an examiner to ask a scenario based question such as, “if you have a student who is private pilot airplane-multi-engine and wants to add on single-engine qualifications, what aeronautical experience requirements would be required for them to be eligible for a practical test?” This is a way to get the future CFI to apply the knowledge that they are adding a “class” on to a certificate. In this case, § 61.63 [https://www.law.cornell.edu/cfr/text/14/61.63] indicates that “A person who applies for an additional class rating on a pilot certificate…NEED NOT meet the specified training time requirements prescribed by this part that apply to the pilot certificate for the aircraft class rating sought.”

If we asked a slightly different scenario, such as “if you have a student who is a private pilot in rotorcraft and wants to add on single-engine qualifications, what aeronautical experience requirements would be required for them to be eligible for a practical test?” This requires the would be CFI to understand that the student is changing “category” and that § 61.63 [https://www.law.cornell.edu/cfr/text/14/61.63] indicates that “A person who applies to add a category rating to a pilot certificate…MUST complete the “training and have the applicable aeronautical experience.”

The ramifications for training here are important. Lack of knowledge that a “class addition” exempts the specified training requirements could lead an instructor to require a student to do training that was excessive and not required. Failure to know that the training is required in a category change could result in an instructor not providing required training and cause a candidate to be less than qualified for the desired rating.

Knowing more than just the regulatory requirement of what the minimums for a flight review is one important one. It is worth having a plan for what you would actually do, and a really good idea to build that plan with some help from AC 61-98D – Currency Requirements and Guidance for the Flight Review and Instrument Proficiency Check [https://www.faa.gov/regulations_policies/advisory_circulars/index.cfm/go/document.information/documentID/1033391]. The same logic holds true of what you will do if you are going to be giving a pre-solo knowledge test for a student. Just knowing you need to do one without having developed one, obtained one, or resources one isn’t really enough. Both of these are things that, when done properly, can exhibit that you don’t just “want to be a CFI”, but instead, that you “are READY to be a CFI” and actually do the job if you pass and the next day you are going to work professionally as an instructor in aviation.

Will failure in the knowledge of the application of just one of these areas result in a failure? Probably not. But start having some fuzzy knowledge on more than one and we start to get nervous as examiners that you won’t be properly qualifying applicants, ones that we will likely have to send home if you ever send them to us when you are an instructor, or worse, that you may end up providing training for you are not actually qualified to provide. The skill here that is demonstrated by a CFI is not just rote memorization of regulatory quirks, but an ability to apply how regulations are written to the training that a CFI will be providing. This is an important skill, and it’s why we ask these scenario based questions of potential future CFIs and expect solid performance.