When reviewing FAA certificate issuance data from 2016, it can be seen that the number of student pilot certificates issued on a monthly basis decreased significantly from what were previously very stable monthly averages over recent years. On average, the decrease has been greater than 40% per month. 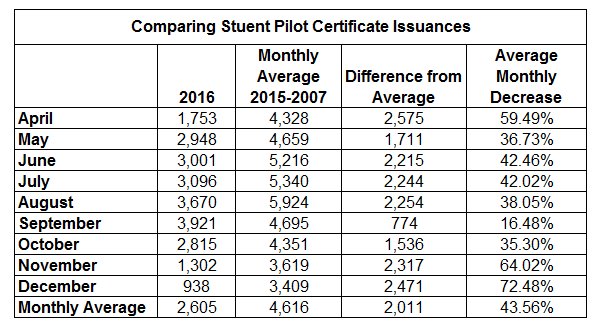 What the data in this chart does not help us to determine is if with the now non-expiring student pilot certificates if the industry will experience greater completion rates of certification beyond the student pilot level than historically seen, or if previous numbers were abnormally high because renewals were required periodically (student medical certifications remained valid for 24 calendar months for pilots age 40 or older, and for 60 months for pilots under the age of 40), or if this is a broader indication that the number of people pursuing pilot certificates is actually decreasing. If this is the case it is yet another indicator of a future constriction in the supply of pilots to the aviation industry.

A note from the FAA publically available data: