Determining how much it costs to buy, own, and operate an aircraft isn’t just about the initial purchase price. There is much more to consider, including things like maintenance, hangar costs, insurance costs, any loan costs you may have, or anything that breaks and needs to be fixed on the aircraft. This doesn’t even take into consideration general wear and tear on items, reserves for components that will need to be replaced over time, or the cost of fuel to fly. These other costs are things that many buyers forget, and it costs them later. In addition to actual dollars cost, it can also lead to less flying or even an unsustainable aviation future.

It is easy to get excited when we find an aircraft our budget will allow us to purchase, but before you take the leap and write a check, transfer the funds, or get a loan, you should take the time to carefully consider what the real operating expenses of the aircraft will be and if they are justifiable and logical.

To assist in this process, I have created a basic personal aircraft operating cost calculator that you can use to compare characteristics and considerations of costs associated with both fixed and variable costs of aircraft ownership, maintenance, and operation. When calculating a real operational cost, there are two major types of costs to consider.

The fixed costs of aircraft ownership are those that are not going to change if you fly five or 500 hours per year on your aircraft. In general, flying more hours per year will drive the hourly ratio of the fixed costs down. The following are a few fixed costs to consider when calculating the real operational cost of an aircraft:

Variable costs are those that will change on a yearly basis depending on how many hours the pilot operates the aircraft.

Bringing the fixed and variable costs considerations together can allow an owner to properly consider what a real hourly and yearly expense might be when owning and operating a particular make and model of aircraft. Without fully considering all of these, the result will be an owner that begins to encounter more and more expenses they had not planned on incurring. In many cases, this results in the owner parking the plane and not using it, needing to sell it, or worse, in some cases having a foreclosure by their loan holder become necessary.

Considering these costs ahead of time will allow a potential aircraft owner to determine if a particular aircraft is really in their budget, not just whether they can afford to buy it, but what their real operational budget will be. For many potential owners, carefully calculating this will result in buying a less complex, less expensive to operate and maintain aircraft, that still serves many of their needs or desires.

With this in mind, there are a few general rules I have when advising clients about purchasing aircraft:

They have more complex systems, more of them, and burn more fuel. In many cases, they only go approximately 30% faster than a comparable single engine aircraft of the same size, so you are at least doubling your cost of operation for less than the same percentage of increase in efficiency. Unless you are considering a bigger and more complex aircraft for purposes of load hauling capacity or another specific consideration, it may just increase your operating cost without gaining any other significant efficiency.
Only major jumps in speeds are worth upgrading to achieve.

Only major jumps in speeds are worth upgrading to achieve.

Major speed ranges of general aviation aircraft seem to hover about 90 knots, 115 knots, 135 knots, 170 knots, 250 knots, and beyond that get into very few aircraft that are personally flown by general aviation pilots. If you are considering upgrading aircraft to go faster, a jump from 90 to 115 knots is minimal and is likely to increase operating cost overall while saving little on distances of travel. If we compared these same speeds on a flight from Pittsburgh to Ft. Lauderdale (an 865-mile trip) we would find the following: 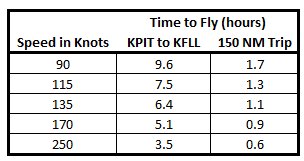 You can see that unless there are major jumps in speed, the differences from each level of aircraft speed is minimally incremental. Consider this carefully if you are going to upgrade ‘for speed’. Unless you are doing very long trips regularly, the math typically doesn’t prove cost effective.

Simple planes get more use typically.

The more complex, expensive, and maintenance intensive the aircraft, the more likely it is going to break and be down for maintenance when a pilot wants to use it. Simple aircraft such as the Cessna 172 and Piper Warrior offer some of the best dispatch reliability and operate at a cheaper per hour cost. Considering this, it is more likely that a pilot who is budget conscious will fly these more hours per year than a more expensive per hour aircraft.

An aircraft that is flown more hours per year is spreading its fixed costs across more hours and as a result, it has a lower ‘per hour’ operating cost. Certainly, the variable costs go up on a yearly basis when the aircraft is operated more, but the ratio shows that an underutilized aircraft is many times more expensive per operating hour than a pilot may be able to rent an aircraft instead of owning one.

Renting can be cheaper than owning.

Taking the time to calculate the realistic per hour operating cost you would experience on an aircraft can help you determine if you should really be purchasing an aircraft. From a purely mathematical perspective, if you are going to fly few enough hours per year that the cost of a personal aircraft per hour would be more expensive than you could rent an aircraft to accomplish the same goals, you probably shouldn’t be purchasing an aircraft. If you still want to own an aircraft when this math is the case, it is a personal decision because it is the plane you want, you don’t want to share, you are looking for a tax deduction, or it is a convenience decision. There is nothing wrong with any of these, but it is a decision you should make based on valid calculations instead of on a guestimate or an emotional decision of how cool you think it would be to own an aircraft.

If you are considering purchasing or upgrading aircraft, consider these things carefully, do the math, and be honest with yourself. If your budget is not limited, feel free to shoot for the sky and buy whatever you want, but do it with the knowledge of what the real expenses are going to be. If you have limits on your budget, consider what you realistically want to spend, and find an aircraft that stays within that budget based on all of the above considerations. Doing this will allow you to enjoy an aircraft longer and with more use than if you find it is costing you more than you expected.