With less than a week to go before the proposed departure, the question of is it time to pull the plug on the trip looms.

A pilot must know when to say no right? 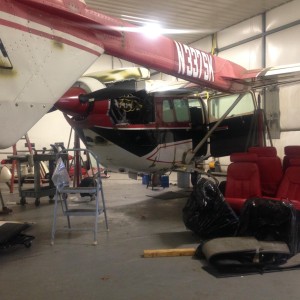 The annual is progressing well on the plane, although there are a couple parts that still need to come in this week if the aircraft is to be ready to fly next Sunday. But that is probably manageable.

What is not manageable is the rest of the logistics that are yet to be accomplished.

At the time of writing this, we still do not have an answer from the intended recipient of the aircraft of how they will provide an updated GPS database that would include coverage for South America (obviously a pretty big part of the trip) or provide charts (we proposed a Jeppesen digital subscription with no answer) to cover the routes.

Bigger hurdles are the fact that we do not have documents required for the flight. We have already applied for and expect the US Customs sticker and the FCC Radio License for the aircraft to arrive this week, but we are missing a couple other critical things. The biggest is proof of insurance with liability waivers for each country of intended landing. This is required to show each place of landing upon entry for customs. And I must say I don’t think they have been procured yet, because two days ago the recipient called into question the route that we proposed.

Our route proposed (see the last post that has this route at https://jasonblair.net/?p=807) would take us from Ft. Lauderdale through Caribbean, down to Trinidad, and through north eastern South America to coastal Brazil. The entire purpose of this route (as you can see it below) is to avoid difficult areas to fly through or areas that are really no-fly zones for U.S. Citizens (think Cuba and Venezuela). 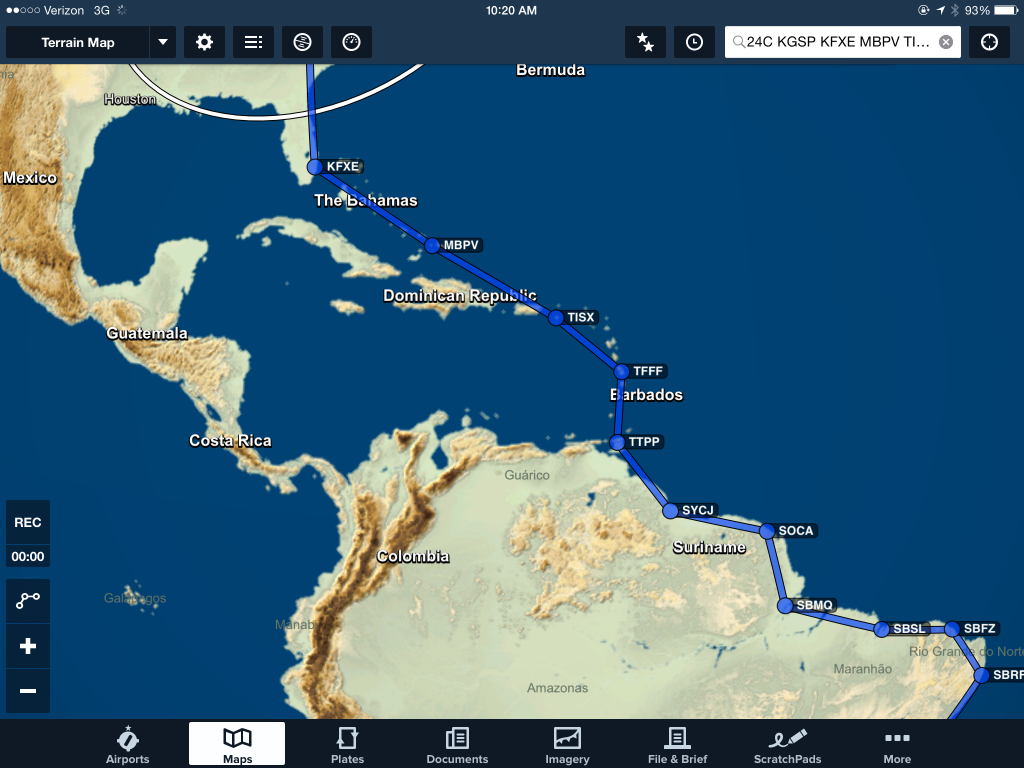 But a couple days ago, the recipient suggested we change routing to do exactly that. Rerouting from Ft. Lauderdale directly (632 miles) to Port Au Prince, Haiti (which required passing through the Cuba FIR), then to Curacao (a 429 mile leg) and then overflying Venezuela on a whopping 746 mile leg into much higher terrain and remote areas of Brazil. This would be followed by an equally daunting 810 mile leg to the next stop they proposed in Brazil. The goal to save few hundred miles of flight and the cost of the gas for the flight. See the route below. 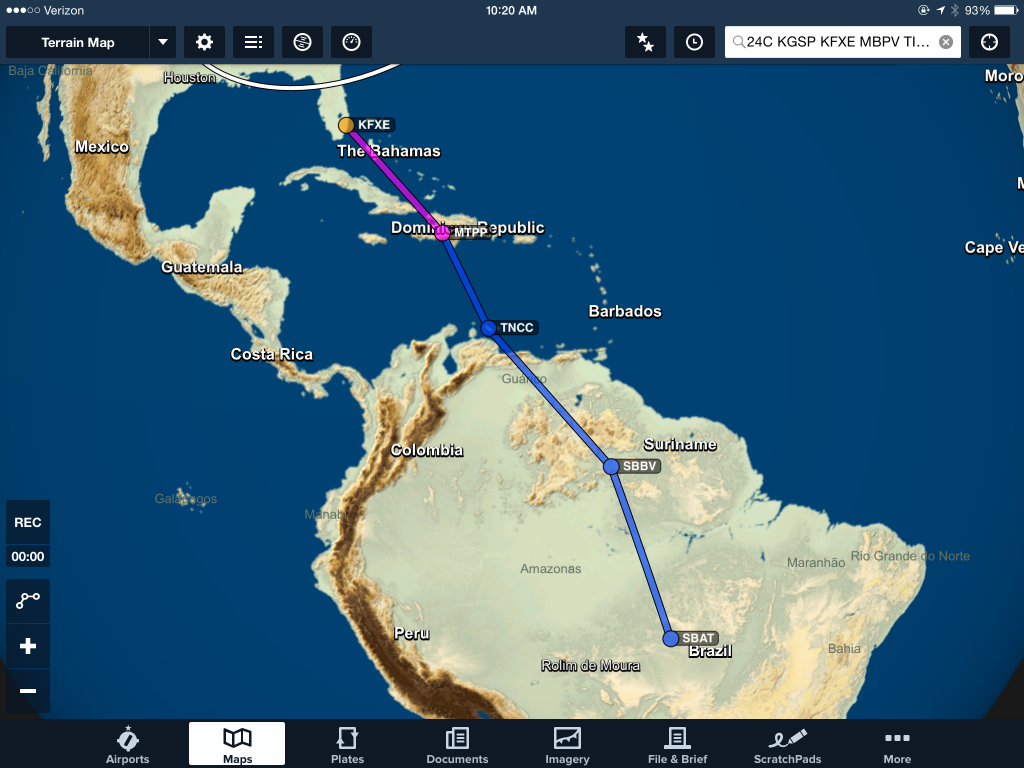 This comes with multiple problems. The first is obviously coordination of flight through the Cuban FIR, followed by over 400 miles of open water flight, then the problem of flying over Venezuela, and very long legs over jungle and much less hospitable terrain than the original route we had proposed. For me, Cuban overflight is a no-go. Over 400 miles of open water is not a good choice when a more easterly route wouldn’t add much overall distance and would allow a pilot at almost all points to stay in established IFR routes and within striking distance of land at almost all points of the flight. The long legs into and in Brazil stretch beyond logical distances for this aircraft. Assuming normal fuel burns at an altitude of 10,000 MSL the aircraft might be able to make between 900-950 miles of flight before it runs out of gas. 746 miles and 810 miles not only stretch this endurance beyond a good practice range, but they certainly would not allow for IFR fuel reserve minimums to be met, especially if an alternate airport were required at any point. This would leave a pilot to assume that the entire leg could be completed VFR and that weather over a 5 hour flight leg would not change at all. Also probably not a good risk to take.

So, I proposed an alternate route, one that takes us through the islands as originally planned, and where we would deliver the aircraft to Trinidad where a pilot more comfortable (and able to overfly Venezuela) might meet us and takeover the remainder of the flight. The difference in what I proposed to what they suggested is less than 200 miles of flight. 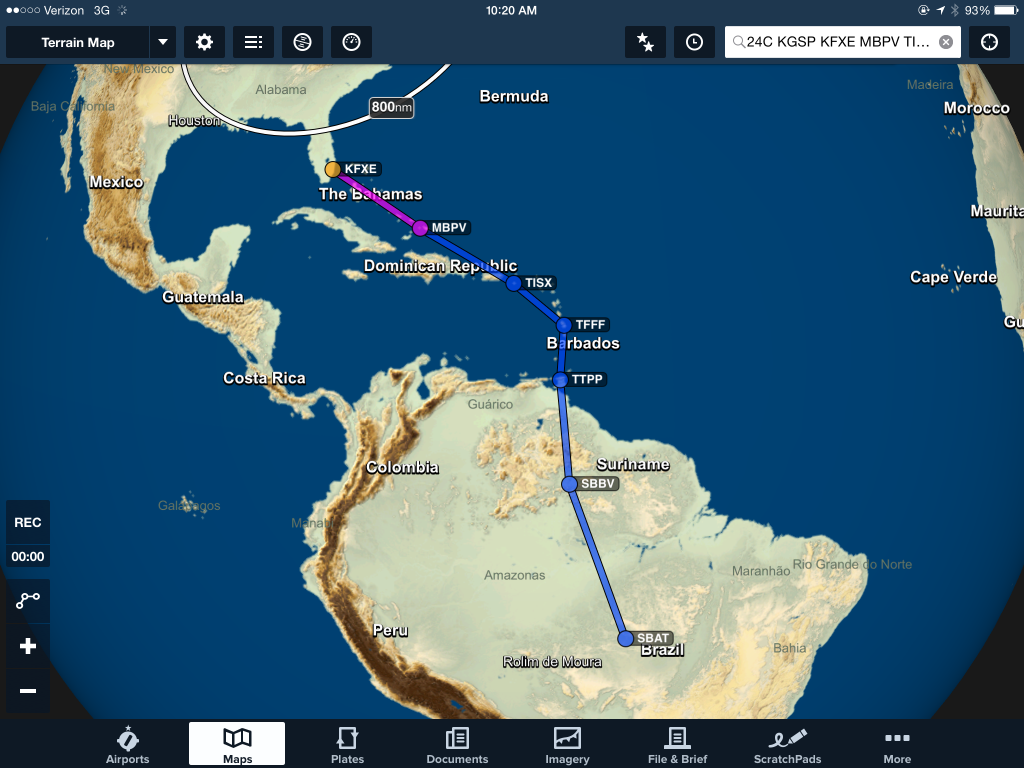 Another option is to deliver the aircraft back to Ft. Lauderdale, where a different pilot of their choosing might take over and fly the route they have proposed. Or, perhaps they will choose to have a different pilot all together fly the entire route from Michigan.

On top of routing questions, there still is outstanding the question of how the recipient would provide funds for the flight to be completed. With less than a week to the proposed departure, timing to allow for any transfer of funds becomes improbable to be completed considering the international transfer requirements. Reality begins to meet logistics planning and it becomes unlikely that even if all the other questions could be resolved rapidly, that the departure date could be met as planned. And considering other time commitments I have in upcoming weeks, even a short delay in departure would mean that I must bow out of the trip. The time had been dedicated over a month ago, but the logistical requirements have not been met in the interim.

So, the question is, does the plug need to be pulled on this trip at this time?

A pilot must know when to say that a trip cannot be completed in a manner in which they are comfortable, consider safe, and could be completed appropriately. Barring some major changes, at this time, I am at that point.

The exercise has been worthwhile, and I have learned much through the process, but for now, the trip is on hold. Perhaps I will have an opportunity to complete part of it or another such trip in the future.