In 1999, there were 79,684 flight instructors according to FAA records. By last year, there our numbers had risen to 98,328, an increase of 23% in just 10 years. This however isn’t necessarily an indication that we have a greater capactity to provide pilot training than in the past. 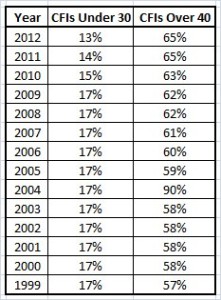 On the surface, more CFIs would seem to incidcate that more flight training should be available, but it may in fact just represent a change in demographics of the CFI community.

While it is somewhat anectdotal to say so, it is logical to state that fewer older CFIs are engaged in high throughput capacity training efforts. These training providers are typically staffed by younger CFIs (who are many times seeking experience to leverage to gain other professional pilot jobs) who provide a bulk of the training in the United States. 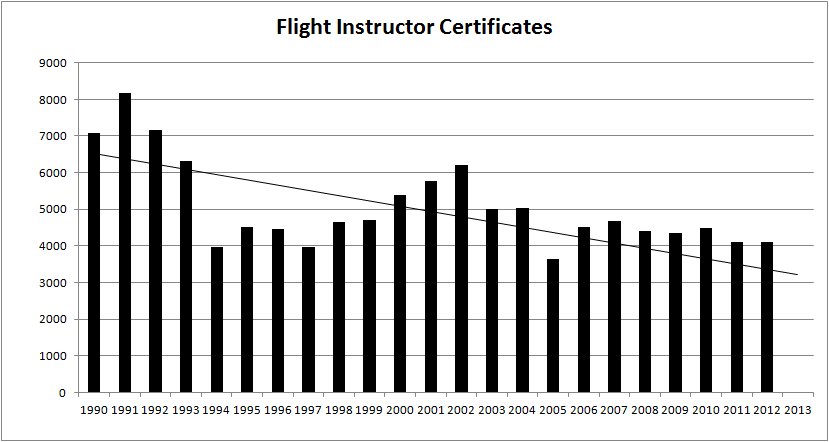 Ok, enough math. What does this mean?

It means that while others are concerned about a pilot shortage, there is also changes in the flight instructor community that is going to change our sourcing of flight instructors. And it probably means we are going to see a significant drop in the number of CFIs in the upcoming years. 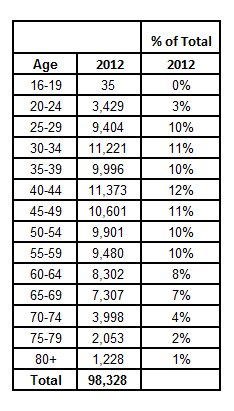 As of 2012 only 7% of our CFI community was over the age of 70 and only 1% over the age of 80. Roughly 15% of our community was between the age of 60-70, representing over 15,000 instructors. If we extrapolate that math, we must assume that about half of them will follow the trend of retirement as CFIs as they get older and that we will additionally lose instructors who age to the over 80 group. The two of these drops will represent approximately 14% of the CFI community, or 13,765 CFIs off the rolls. Sure, we will be adding some new ones back to the system, but we aren’t doing so at same rates we did historically.

The reality is that we are probalby going to see a dropoff in our total CFI numbers.

I can’t be so sure it does. The reality is that many of our older CFIs are only providing instruction “on the side” or as a “retirement job.” Many of our middle aged CFIs are actively workign as professional pilots in other capacities but don’t want to let that hard earned CFI certificate go, so they keep it active. The younger groups of CFIs are typically those engaged in day-to-day training provision in large scale training operations.

Can we make more CFIs? Certainly! But we need a reason do to it. One reason there have been less CFIs certificates over the past few years may simply be out of a lack of necessity. As hiring minimums came down at many airlines, a larger number of pilots seeking professional careers didn’t need to work as a CFI to get the experience needed to get hired. As our regulations change, so may this relationship again.

None of this data tells what is the crystal ball on its own. But it does give us some things to look at, consider, and strategically consider for our industry’s future. With data like this we can start to analyze trends and think about what will be needed to best serve our entire industry.

What are your thoughts? I would like to hear from anyone willing about this and related data. Let’s start a discussion. Feel free to post comments from this and I promise to respond!

Want to see all the data breakdown of the CFI age distributions by year and how they have been trending?

Click here for the full spreadsheet as a pdf.