In January of 2020, the FAA began a transition to knowledge tests that will no show AKTR codes as areas found deficient instead of the previously used LSC codes.

For DPEs, CFIs, and applicants, this represents a change in how we all figure out what areas were found deficient in knowledge when someone takes an Airman Knowledge Test. So, to help make it more understandable, I wanted to share a little information about how to read these new codes.

How ACS Codes Work on AKTRs

Codes will be associated with the Knowledge, Skill, or Risk area in the applicable ACS to which the DPE/CFI can find the specific area of deficiency for an applicant.

With that said, lets give it a try and show you couple examples of what this would look like.

From a private pilot practical test report I saw recently, we see codes on the bottom. Picking the first one, we see it is “PA.III.A.K8”. 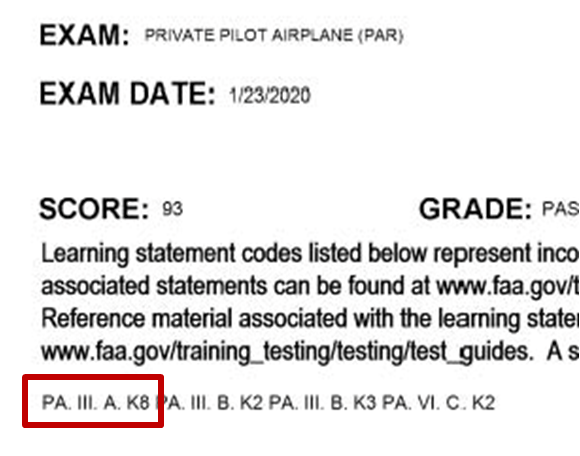 This code is associated with a section in Private Pilot ACS and allows us if we find that reference to determine the specific knowledge area that was found deficient (eg. the applicant got a question wrong on that topic).

So, if you want to review the proper area, you would probably visit NTSB 830 and do a little extra studying, teaching, or testing if you were the DPE giving this applicant a practical test.

Looking at another example from an Instrument Pilot Airplane Airman Knowledge Test, we might find the following: 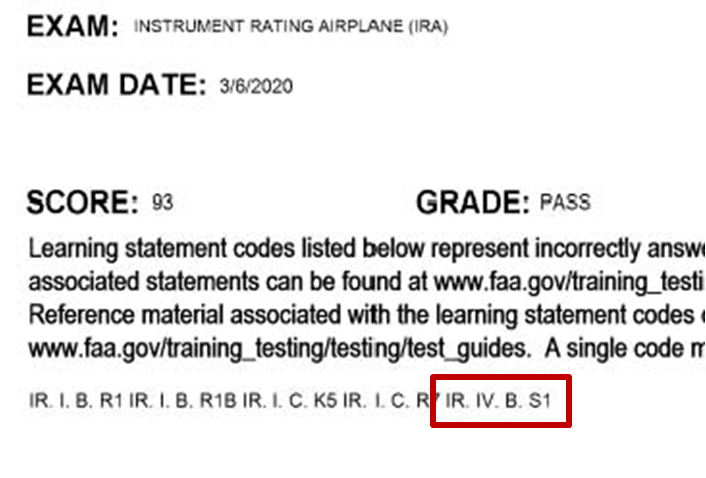 The code, as an example, IR.IV.B.S1, would refer to the Instrument PIlot ACS and we might find it covers:

Some extra study of partial panel interpretations or just basic understanding of flight attitude instruments would be in order.

In one more example, this time from a Commercial Pilot Airplane Airman Knowledge Test, we might find:

The representative code I looked at for these example, CA.I.F.K3, would refer to the Commercial Pilot ACS and would highlight the following area for some additional study:

It is pretty easy to reference once you do it a couple times, and it gives us more detail than in the past about what specifically should be focused on for some additional study, training, and testing.

Hope this helps as we all work to transition to the new and improved AKTR codes on FAA Airman Knolwedge Tests!

Worth noting, LSC Codes will exist for PTS based checkrides or tests prior to January 20, 2020. These will still be present on some tests for the up to 24 months they remain valid. So, if you are working with a legacy test that shows the LSC codes, you can still find those codes here:

Need to find the ACS for an applicable test?