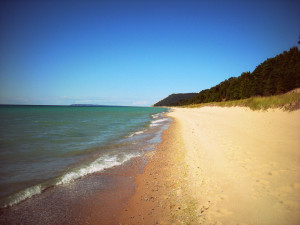 As the weather gets better in the spring and summer months, many of us fly more for pleasure than during the winter months. A fantastic pleasure flight that many of us do near the Great Lakes is to fly the shoreline, admiring the beautiful waterfront that our Midwestern states enjoy!

But this can be an area of increased chances of mid-air, shall we say, encounters.

The FAA’s Airman’s Information Manual even highlights times when increased chances of these risks occur. Including flat light conditions, white outs, low ceilings, and low light conditions in addition to flying around a lake.

“Flying the lakeshore” for a summer tour is a common and very enjoyable thing to do, but you probably aren’t the only person with that great idea on a nice summer evening!

Be advised to put a little extra effort as the pilot, and ask passengers to help, in scanning for traffic that may be travelling the same or opposite direction as your aircraft along the lakeshore.

The chances of traffic incursions become even more enhanced when lower ceilings exist that drive traffic to the same altitudes. If, for example, a 4000 ceiling exists, VFR traffic still has plenty of room to fly, but will mostly be driven below the clouds. This limits the altitudes that aircraft can choose and decreases the options for traffic avoidance.

Along with increased traffic scanning attentiveness, it is a great idea to utilize VFR flight following by radar facilities even if not within the specific lateral limits of their airspace. This can increase the chances that they will help the pilot identify any traffic conflicts, both those that they are talking with and any that are not talking with a controller and may just be flying squawking VFR on their own.

We all are looking forward to a fantastic spring and summer season of flying after a dreary winter. Consider this one extra risk area and how you can limit the potential dangers as you enjoy the beautiful scenery of the Great Lakes shorelines!